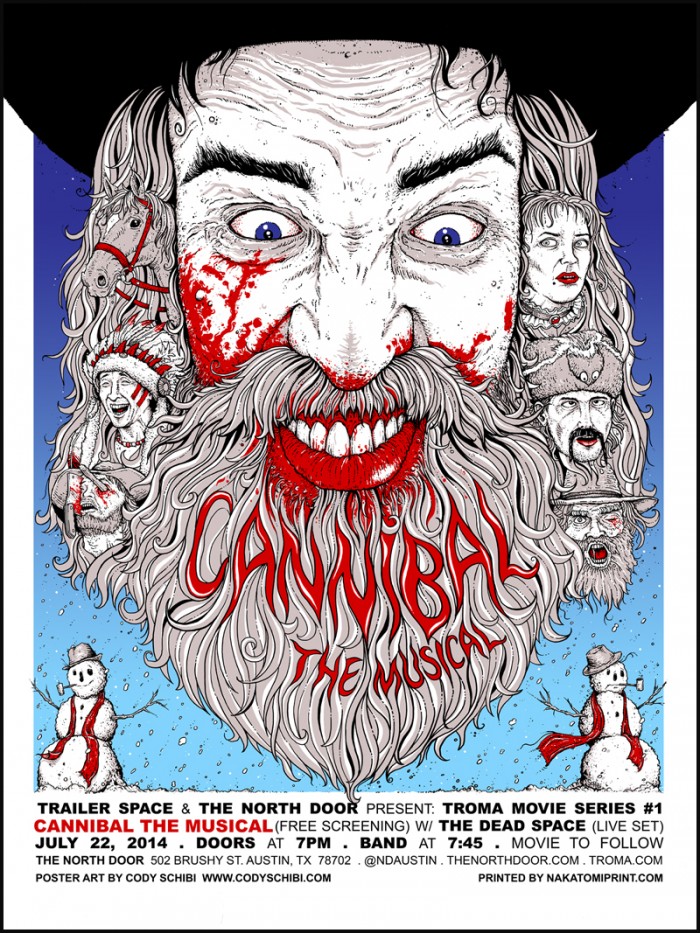 Produced for the NORTH DOOR’s screening of Cannibal the Musical here in Austin, this 18×24 hand-printed silkscreen poster is signed and numbered by the artist, Cody Schibi in an edition of 100!

the remaining copies from the event are now available for purchase on the Nakatomi site- we’ll have MUCH LESS than the 100 for sale!

“The sky is blue & all the leaves are green…”
Some of you may recognize those lyrics right off the bat-
Those instantly catchy words are from South Park Creator, Trey Parker’s first film & debut into the entertainment world: CANNIBAL! THE MUSICAL.

This hilarious film tells the VERY REAL tale of Alfred Packer (played by Trey Parker) who was convicted of murdering & eating his traveling companions. He defends himself & states the “true” side of the story as he waits for death by hanging. The movie was picked up by TROMA ENTERTAINMENT(the same maniacs that brought you the Toxic Avenger) & fast forward to present day, the bad asses at Austin’s The North Door & Trailer Space Records are coming together to present ‘TROMA Night’ each month, kicking it off with this flesh-eating gem! The curators contacted local screen print guru Nakatomi Inc. to create limited edition posters for the event & I was lucky enough to design the screen print for them.”- Cody Schibi

Pick up the print HERE

And check out Cody Schibi’s killer art on his site HERE.