Last FEBRUARY, artist Nick Derington launched his BOSS FIGHT Kickstarter (see the project here) and that project took off like a rocket-propelled grenade!

Here we are, half a year later, and We’re back at it again with a BRAND NEW set of Boss Fight prints!

These detail shots from the new 3-print set will give you a PRETTY GOOD indicator of what this set is all about- those 90’s era First Person Shooters that totally revolutionized gaming and pop-culture, and almost kept me from graduating high school! (Seriously, how was I supposed to get work done with these games out there?!?) 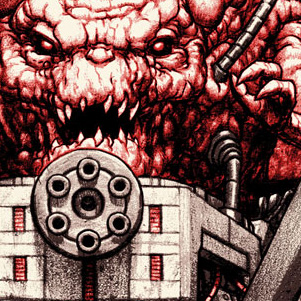 The full 12×24″ images will be revealed when the project goes live THIS TUESDAY. We’ll tweet the link when it’s up either at the Nakatomi account HERE or artist Nick Derington’s account HERE. 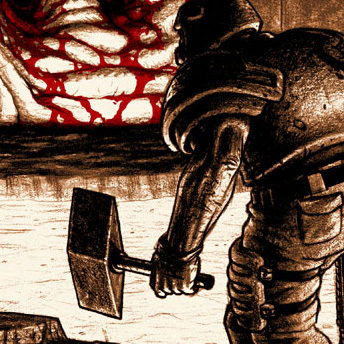 This set looks AMAZING in person, and we can’t wait to share it with the world!

Keep your eyes peeled on the twitter account, and thank you all for making the last project such a raging success- and we hope to see you for this one as well!