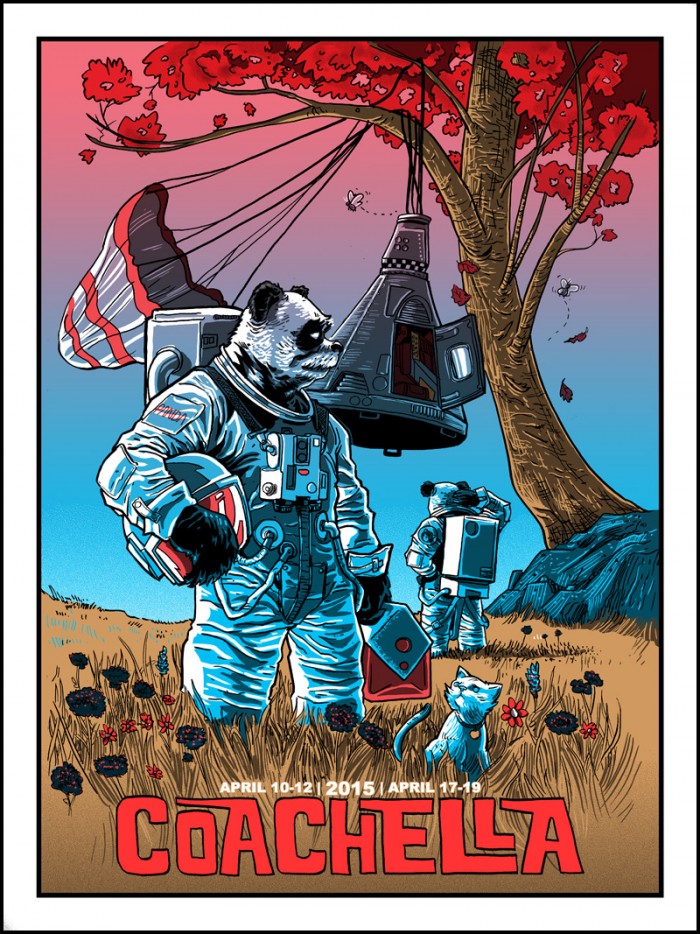 For the second year in a row, artist Tim Doyle was asked to produce a poster for the annual COACHELLA music festival!  He decided to follow up the Panda Bear theme from last year, making this a direct ‘sequel’ image!  (You can see last year’s poster HERE)

This year’s print is 18×24 and is signed and numbered in a tiny edition of 100 worldwide. The poster debuted back last weekend at the fest, and that weekend’s copies sold out immediately- the remaining 50 copies will go on sale at the merch booth there starting on Friday the 17th.

THEN- on Monday the 20th, we will release the tiny amount of AP copies allotted to us on the Nakatomi site at 2pm Central time.

Prints will be available HERE on Monday at the top of the Tim Doyle section of the Nakatomi store! 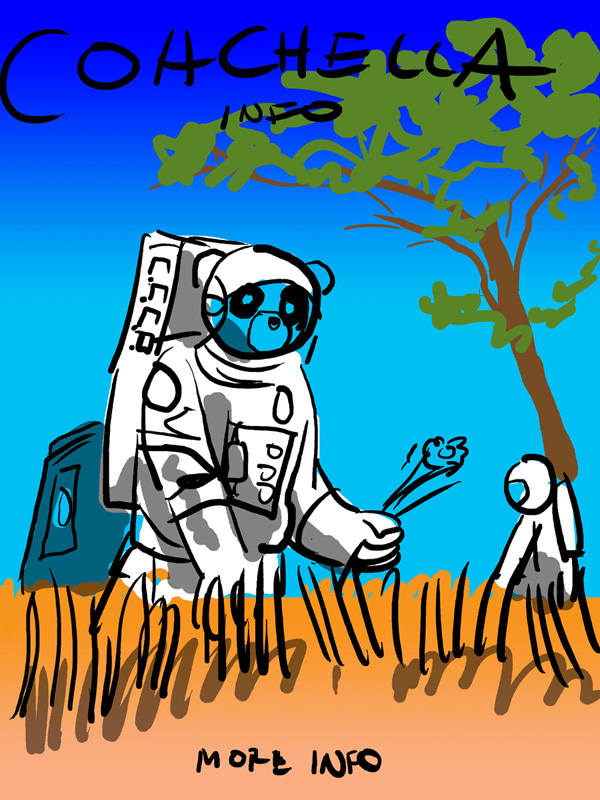 1- Like last year, the only design requirement was ‘no skulls, drugs, alcohol, or guns!’  I had such a fun time drawing the Panda playing guitar last year, I decided to revisit that character, and put him in the space suit that first appeared in my Black Keys and Primus poster from a few years back. In my head, this is the same guy the whole time- a Panda-Astronaut. So- I did this quickie doodle here in photoshop and sent it off for approval. They came back with an immediate ‘YES’ and I set to drawing! 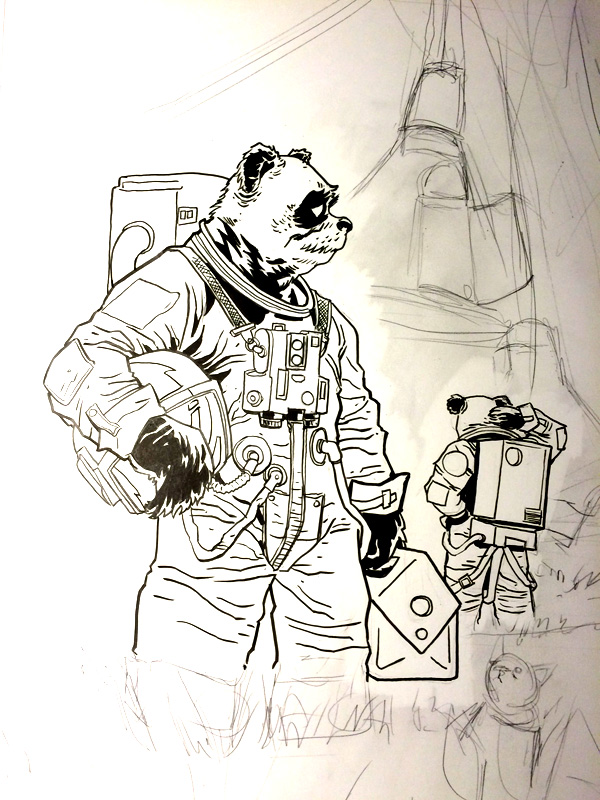 2- With that general layout in mind, I started drawing- I just kind of rough shapes in on the board in pencil, and started inking while it was in progress. I didn’t really know where I was going to end up on this print, just finding my way as I went. I decided to take the helmets off so that you could see that they are clearly pandas. Also- my cat Pickles made an appearance in this stage. It just fit the composition well. Composition-cat. 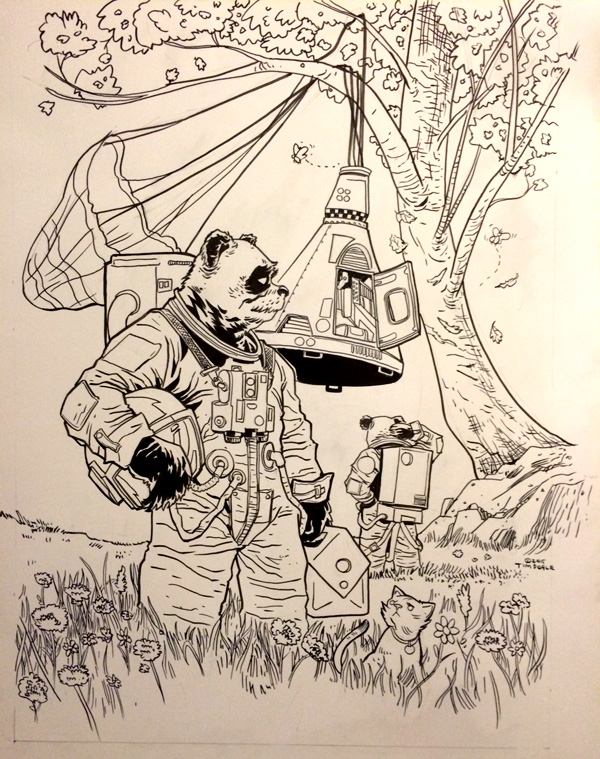 3- Here’s the original drawing, all completed! Pen and ink on an 18×24 sheet of Bristol board. I think it’s time to admit I have no idea how to draw a flower. Also- how did that capsule get up in that tree? Who let the Pandas drive the space-ship? Silly pandas with their fuzzy faces and bamboo. 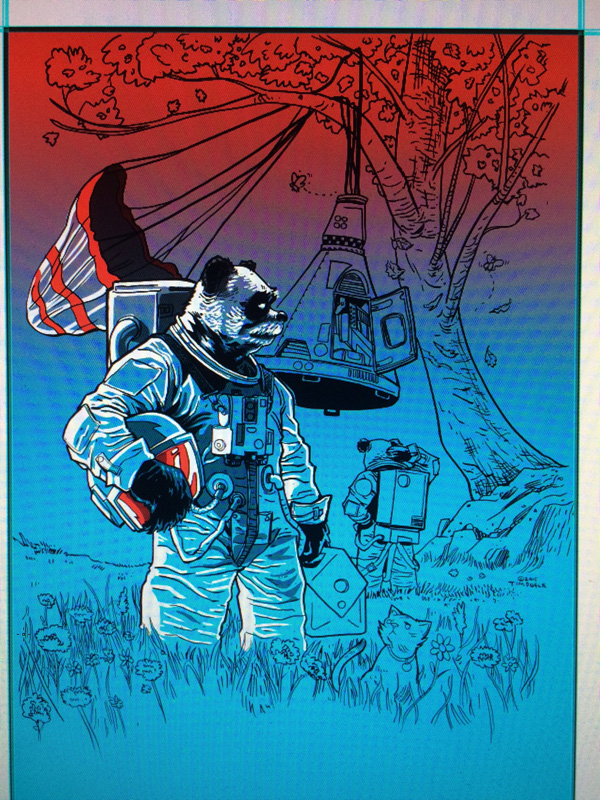 5- So we scan this sucker in, and start coloring in Photoshop! I wanted this to stand out colorwise from last year’s print, but still feel in the same tonal range. I THINK I pulled it off. Maybe?  I work in layers on Photoshop, with each color on it’s own layer- in the same order that the colors get printed.  The completed digital file is at the head of this post… 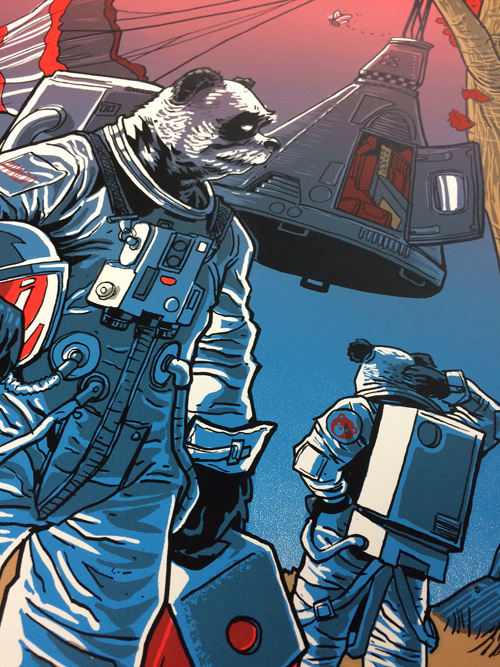 6- Detail shot of the completed, printed poster! I’m probably a little to pleased about the Panda/NASA logos there…
On top of a split fountain color blend in the sky, we have some subtle half-toning in there to push a depth of field a bit- really happy how this one turned out. 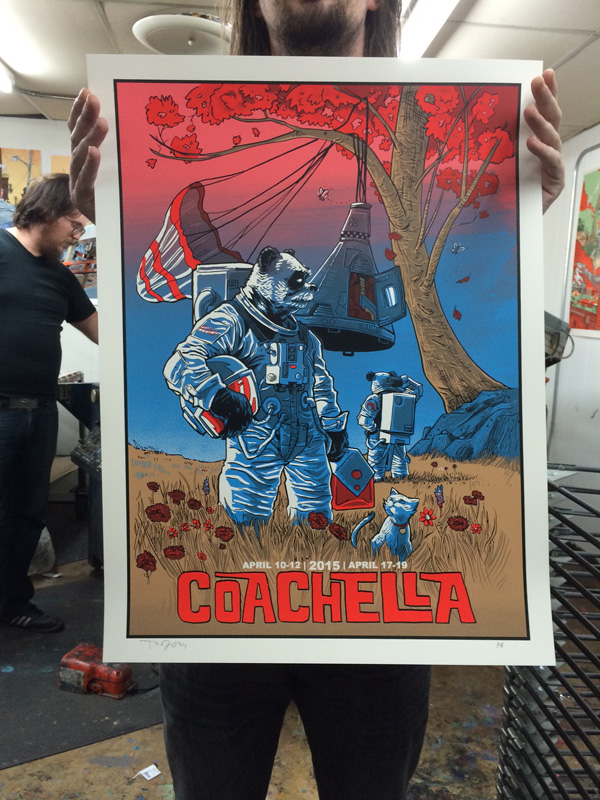 7- Full shot of the finished print- in hand!

Thanks for looking, everyone-and we’ll have AP copies of the poster on sale on the Nakatomi site this Monday at 4/20 at 2pm Central time HERE.