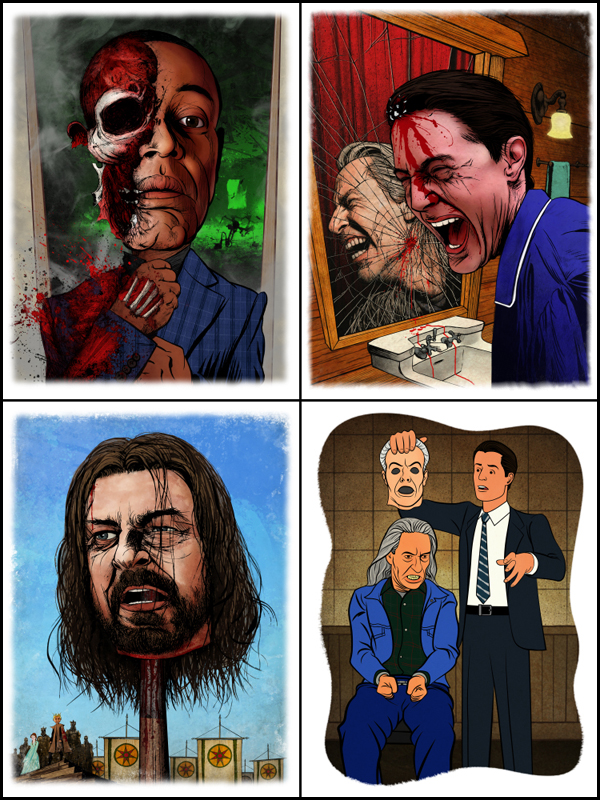 Artist Jon Smith debuts his new print series- ‘SPOILER ALERT’, On Sale tomorrow, Tuesday 8/26 at 2pm Central Time!  Depicting some of TV’s biggest SPOILERS, this print-set is sure to delight or completely enrage friends! (“WHY DID YOU SHOW ME THAT, I JUST STARTED WATCHING BREAKING BAD!”)  Note- Nakatomi is not responsible for stabbings that may result in the gifting of this print set.

The prints will be for sale HERE at the top of the Jon Smith store at 2pm Central time TOMORROW, Tuesday 8/26. 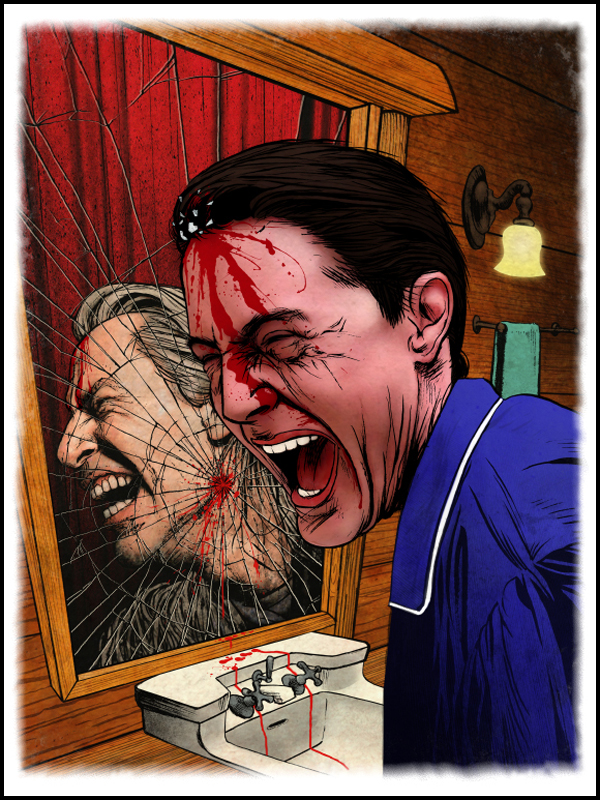 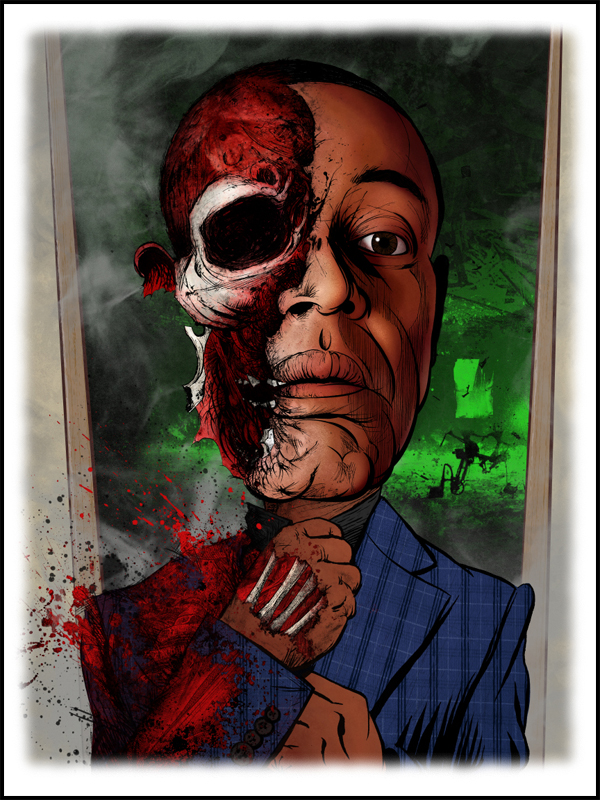 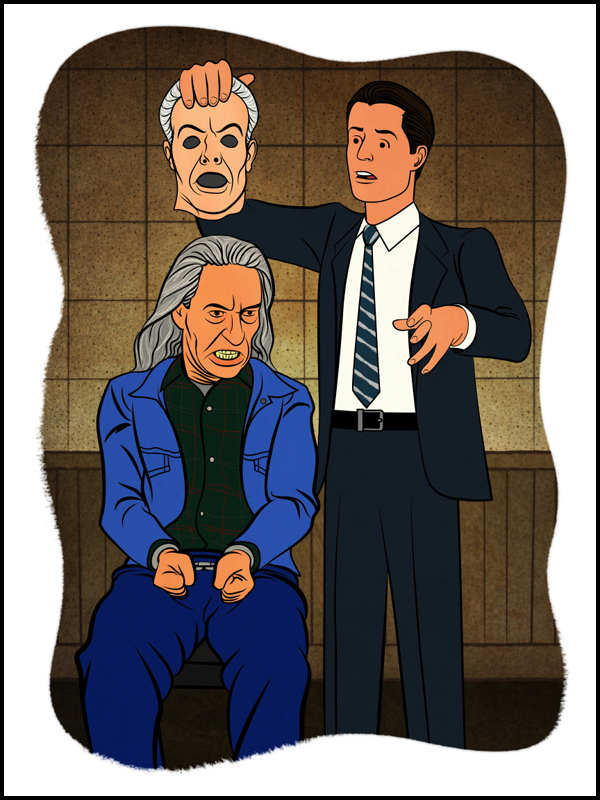 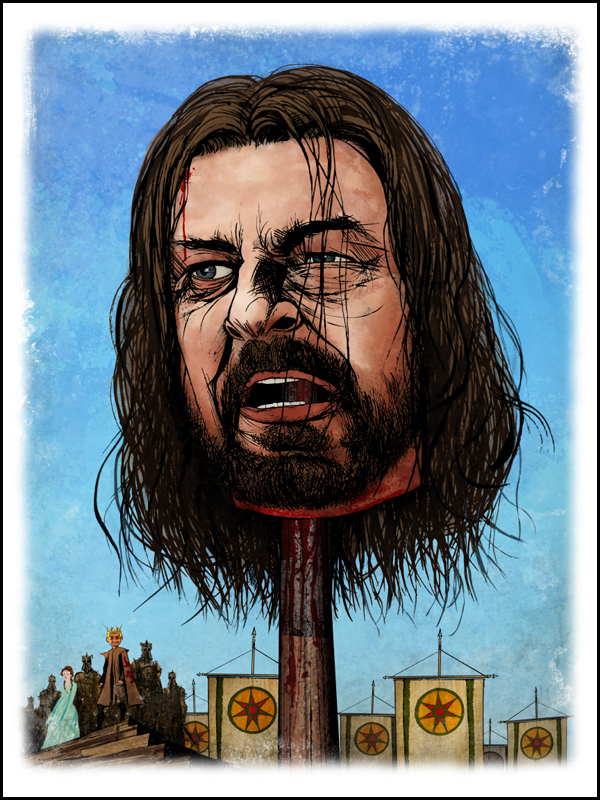 These prints are produced in-house at the Nakatomi Print Labs.  Printed on Natural Watercolor paper with archival Ultrachrome inks.  All orders will ship within 1 week of on-sale date!

“Spoiler Alert: Jon watches a lot of TV! Er, TV shows anyway…the only reason to actually have cable is to watch live sports.  As we know,  TV is the dominant medium in entertainment as they have the ability to shoot film quality picture and have hours and hours to develop characters+ whereas movies have but two hours or so to tell a story and require leaving one’s house and the paying of money!

Plus, with Netflix and countless streaming options online we can binge on a myriad of classic shows thus the resurgence of The X-Files, The Twilight Zone and Twin Peaks in recent years, just to name a few.

SPOILER ALERT  is  a new print series showcasing the most epic shocking events in major cult television history! At this point if you’re not up to speed on Breaking Bad, Twin Peaks and Game Of Thrones you’re shit out of luck.

I think the idea came from my Fire Walk With Me print last year, depicting he good and bad sides of Leland Palmer. I heard somebody saw the print and it ruined the show for them as they were in the middle of watching Twin Peaks and hadn’t figured out Leland Palmer killed Laura Palmer. Sorry.

The cliffhanger ending of Twin Peaks that will be hanging forever as the show was cancelled despite it being possibly the most intriguing ending ever,

Gus Fring’s face-off from Breaking Bad, the final scene of the greatest TV villain ever,

and Ned Stark meeting the end that most Sean Bean characters do- in gruesome fashion…something tells me that Joffrey kid’ll get his eventually.

The fourth print, “The Scooby Doo Ending” was almost not included as it’s another Twin Peaks print but I thought it funny enough and I like that it’s a departure in style from the gritty/morbid nature of the other three pieces AND it’s technically a mashup of another cult TV show, Scooby Doo!”

The prints will be available individually or as a matched numbered set through the Nakatomi store HERE tomorrow at 2pm Central time!