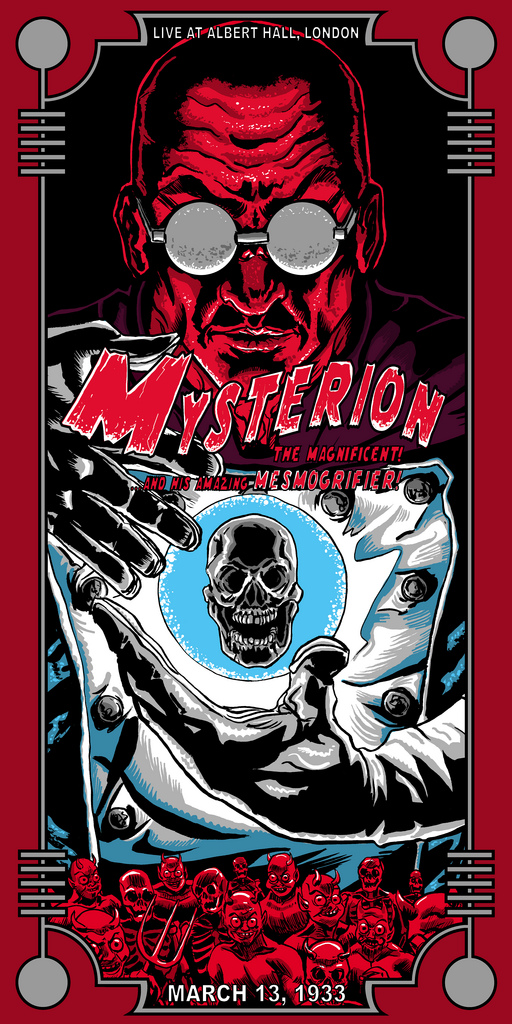 For those of you not following us or Doyle on TWITTER or FACEBOOK, or even the new web-app that lets you stare at us as we sleep, you might not know that Tim Doyle is doing all the art chores on the trans-media comic/play/ live-action Graphic Novel, The Intergalactic Nemesis!

Issue one is already drawn and printed, Issue two is at the printer’s right now, and he’s wrapping up the last few pages on issue 3. Coming this Labor Day, the entire live action play/ comic presentation will be performed at the 2400 seat Long Center for the performing arts here in Austin!  That’s a lotta nuts.

Here’s a snapshot of what this is going to be like, but on a smaller scale, as chapter one was performed at the Alamo Drafthouse a few weeks back, with subsequent chapters to follow monthly at the Alamo-

Well, what’s this post all about now? Well, that image of Mysterion the Magnificent above is Doyle’s  latest print, and the first print for Nemesis! Mysterion is one of the villains from the book, and he’s a stage magician/ mesmerist with BAD intentions for our heroes. And doing a gigposter in the style of the magician adverts of the time (1930’s) just made TOO MUCH SENSE. The print is the most technically proficient print we’ve ever done, and I think it shows- the over printing, transparent gray, metallic inks- the whole thing came together beautifully, under the keen printing hands of Nakatomi print-labs technician, Clint Wilson.  It measures 12×24 and has an edition of 300,  signed and numbered by Doyle. The prints, and the comics are available right now in the Intergalactic Nemesis store HERE. The poster retails at $30 a pop, and is in hand for immediate shipment!

And while you’re at it- check out the cover to issue 2- Yikes! The colorist, Lee Duhig, KILLED on this!