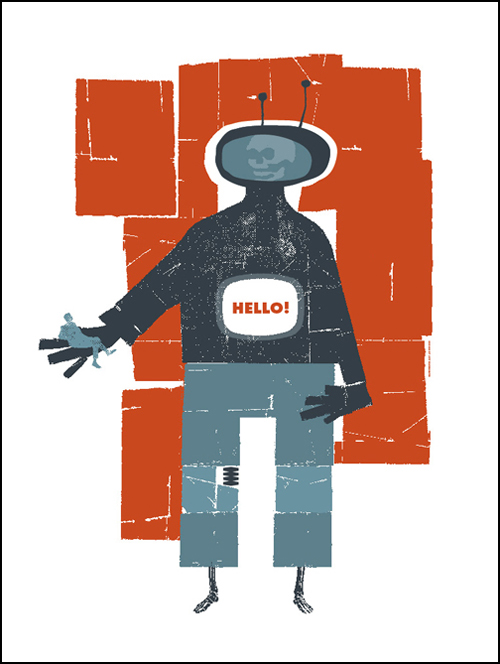 It’s midway through Jeff Kleinsmith‘s glorious month of residency at the Nakatomi Invitational. He was nice enough to sit down with us for some hard-hitting questions while providing some bone-crushing answers. Mr. Kleinsmith is one of Seattle’s most innovative designers – besides being the long-time art director for Sub Pop Records, Kleinsmith is a celebrated freelance designer and has produced a plethora of concert posters and art packages for a multitude of bands.

BIAFRAH WINFREY: What is your work environment like? Location, lighting, material, extent of mess, presence of kids and/or dogs?

JEFF KLEINSMITH: I actually have two work environments; one at Sub Pop and one at home. I’m not always able to get creative work done at Sub Pop so I bring files home and work at a table I’ve set up in my rather large living room. I like to be in the family mix rather than sequestered in the basement, as I just feel like I’m not really “home from work yet”. I can watch TV and talk to my wife and kids and still get stuff done. The Sub Pop office is great. It’s set up with everything I need and more. The space is way away from the clutch of cubicles and business offices and overlooks a bustling bus stop. The heat/air tubes didn’t make it this far so it is either HOT or COLD and I never turn on the lights. I prefer cold and dark and I’d say it is that way 80% of the year.

BW: Do you have any rituals you go through before starting work?

JK: I think I just panic. Especially if it’s something I really want to do. There’s a lot of anger, pain, resentment, tears while I try to figure what the fuck I’m doing. Then it goes one of two ways: 1. I make it through the pain with an actual good idea, executed well or, 2. I pray that the job is either canceled or there is some big tragedy that allows me a decent enough excuse to get out of doing it.

I look through a lot of books. Even though I know there is so much more on the web, I just like turning my chair around to the table behind me a looking through books and magazines. Even if I don’t see anything that’s particularly influential, I feel like it gets me thinking.

JK: It used to be my analog photocopier but they stopped making parts and toner for it. So, it’s really a legal pad, mechanical pencil, scanner, Mac, Illustrator, and Photoshop. That’s pretty much it. I use a light table, waxer, tape, and a ruler from time to time but not like the old days.

BW: Have you developed any particularly unique technique in your design work that you’d be willing to talk about?

JK: Not really. I mean, I collage a lot more than I draw so I just collect and scan thousands of things and clean them up in Photoshop or with a pen and Xacto knife. Then I just start playing around until something happens. (Very technical, huh?) I mean. I have a concept and a sketch but I don’t like to get too detailed/specific in the sketching stage because I love what happens when you just start messing around. In fact I intentionally pull back at that stage. You discover these relationships between images and, if all is going well creatively, it all just sorta comes together. I don’t mean to sound like a hippie but, you know, it’s way more fun for me to stumble upon a great thing than sketch it all out initially. I guess it’s the same thing but at different stages in the process.

BW: Can you talk a little bit about your process in designing this month’s Invitational for Nakatomi?

JK: See number 2 and 4. Heh. I loved doing this one and it came together pretty easily. One of those successes in my book. It felt good from start to finish.

BW: What is the process like in designing artwork for a band? Do you work directly with them, or are you truly given the role of “art director”?

JK: The bands are a different deal altogether. They aren’t signing to Sub Pop because of who is in the art department they are signing for a whole host of other reasons. The fact that we in the art department have a long track record of generally making nice stuff and are easy to work with is a plus when considering what label to sign with but not a major concern. After they sign we are hooked up with the band as a resource in a way. Most often we are in an art director/layout/advice-giver role. They bring in loose pieces and ideas and we kind just put it together for them. We might caution them against putting type in that part of the photo and sometimes we suggest using the other painting they sent as the cover. That kind of thing. Making sure that their big box of stuff translates into a nice looking piece. The other scenarios are them telling us exactly what to do, or doing the art themselves, or letting us have free reign to design whatever we want. When I have free reign I love to try to work with illustrators/painters. I’ve worked with some pretty awesome illustrators over my 16 years here and the end result ranks as some of my favorite packages.

BW: How do you know when a unit of work is finished?

JK: Ahh, well I’m either sick of it, the deadline has arrived, or I instinctively know that I peaked in the process and won’t be making anything better.

BW: Can you talk about any particularly interesting/exciting work you have lined up for 2010?

JK: 2010 is looking good so far. There are exciting things brewing at Sub Pop generally, and in the art department specifically. I have a bunch of posters on my slate. Better than dumb ol’ 2009.